My summer series The History Of Blonde Bombshells has one more blondeshell to go after Gloria Grahame, The finale will be the greatest blonde bombshell of them all, Marilyn Monroe. Thanks to April VeVea for being my guest for the series. She’s fab..

Gloria was the queen of 50’s noir. I absolutely love her. Gloria could be funny, poignant, a great southern dame, in The Bad And The Beautiful, she won best supporting actress Oscar. She had lots of insecurities about her looks, especially her lips. She’s be in heaven today with lip injections.She thought her top lip was too small so Gloria would stuff tissue in her mouth to give her bigger lips, she also used cotton. Talk about dry mouth. Se had repeated  surgeries until finally the surgeon hit a nerve and her top lip was paralyzed. I thought Gloria was gorgeous regardless. She was married to director Nicholas Ray. Their marriage was falling apart while he directed and she starred in A Lonely Place. The set was no fun. Humphrey Bogart was upset he did not get his wife Lauren Bacall to be his costar. The HUGE scandal were reports that Nicholas Ray walked in on Gloria and her stepson (age thirteen) in bed together. Anthony was sent away and Gloria Was divorced. She made a bunch of great noirs like The Big Heat and Sudden Fear with Joan Crawford. To say the women didn’t get along is an understatement. Then came another scandal involving Anthony  Ray. Gloria at age 35 married her former stepson aged 22 in 1960. It made a great Hollywood scandal and led to a bitter child custody battle with former husbands. Anthony and Gloria were married, had two children together and eventually divorced. Her marriage to Anthony was the longest,  lasting 14 years. Gloria was a strong woman but cancer eventually got her. She died in NYC at the age of 57.

Thanks so much to April.

Mostly thanks to the listeners. I so appreciate you all.

You can listen to the podcast anywhere podcasts are posted, including Spotify and you tube..

I Speak To Author Julian David Stone About His Fab Book It’s Alive! Best Selling Book In Movie Industry Genre..It’s An Inside Look On How Frankenstein Was Brought To The Screen

I talk to my dreamboat David Selby about Babs S, George Cukor, Joanne Woodward and Paul Newman and loads more.. 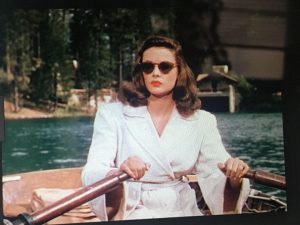